We made it through our first Thanksgiving without insult or injury… well, mostly. Just kidding, it was great. The food turned out great, though Milo didn’t help us much with that part. He stuck with a roll and some sweet potatoes, still holding out on his chosen vegetarianism. 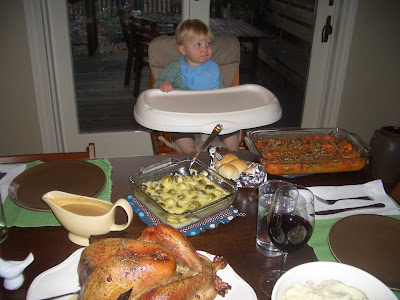 Post-feast, we fed my desire to create some small traditions of our own. Andrew and I put Milo in the backpack for a hike through the woods a block up from our house to get our blood pumping again and prevent an impending food coma. Upon reaching the woods, we realized it was a little too spooky (pretty dark at 5pm now) and decided to settle for a walk around the block instead. Still fun, especially since we ate early so we got to see the other families enjoying their meals together inside cozy houses along the way home.

After Milo retired to his crib for a long rest, Andrew and I tried out the fireplace for the first time… and now understand why the previous owners said it was “broken.” It’s definitely not broken, but the combination of a small chimney opening and using a bit too much newspaper in starting the fire resulted in a bit more smoke than we bargained for. Luckily, or unluckily, our smoke detectors don’t work (we will alleviate ASAP, of course) so no alarm sounded. Determined to enjoy our little fireplace, we opened all the windows and doors downstairs, and continued to work the fire. A little later, we had a nice, warm, smokeless fire to enjoy! It was a really special first Thanksgiving with just the three of us.

The next day, we were joined by my sister, Krista, and her husband Eric, and their two 1/2-year old little boy, Charlie. Milo was immediately smitten. He has met Charlie on several occasions before, but this time he was super excited. He attempted to give Charlie many kisses, and constantly ran up to him, bent over slightly, and said “Hiiiiiii,” his new favorite word. He also tried to imitate many of Charlie’s skills, and showed Charlie how to bang on his hammer toy. We all enjoyed another Thanksgiving meal, as well as a team-sister-baked apple pie that turned out amazing!

On Saturday, we did some sight-seeing, mostly in the sculpture garden and national mall. A fun-filled trip, though we didn’t anticipate the crowds who had the same idea that we did. Ah, tourists. 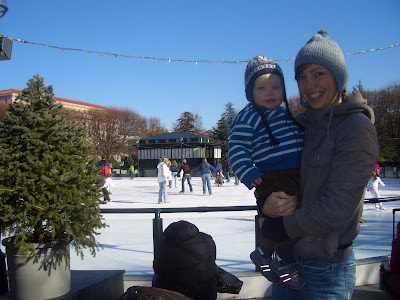 Watching for Aunt Krista in the Ice-Skating Rink 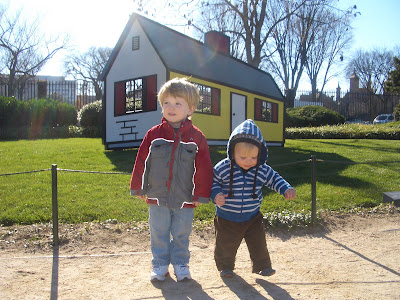 Charlie & Milo in front of the Optical Illusion House

Now we are alone again! Quiet, but maybe better since Milo has really come down with a nasty cold. Maybe it’s a good thing that Charlie refuted those kisses, after all. But we will be around to spread some germs in Ohio in only a month! Now for that crazy Christmas shopping… my favorite time of year for those little ones, especially since buying toys is so much fun!